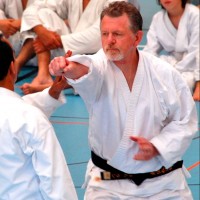 Ron Thom began practicing karate in 1966 and joined Shotokan Karate of America in 1968 at Long Beach City College under Caylor Adkins, and attained his black belt in 1969. Throughout his years in Southern California, Ron was profoundly influenced by the instruction of Ohshima Sensei, who visited Long Beach weekly and led Sunday black belt practices. Along with four other SKA members, Ron was selected to represent the United States in the first World Karate-do Championships held in Tokyo in 1970.

Ron received his Ph.D. from the University of Washington in 1978, and now resides in Sequim, Washington with his family, conducting research in restoration ecology for Battelle Marine Sciences Laboratory. He attained the rank of Godan (5th degree black belt) in 1990, and now serves as president of SKA. 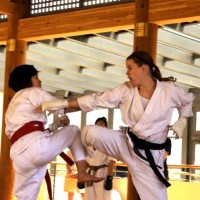 Kate Buenau began practicing in 1999 in Arizona. She practiced with the Phoenix and Santa Barbara dojos prior to joining the Olympic Peninsula dojo in 2009.  She received her black belt in 2006 and became Nidan (second degree black belt) in 2012.  Kate has competed and placed in several tournaments and brings a strong mentality to our practice.  Kate currently lives in Sequim and works on ecological modeling and habitat restoration. 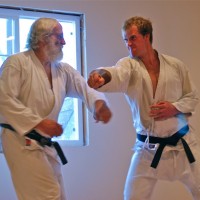 Chris Morgan started practice in 2002 in Boulder Colorado and received his black belt in 2008 and became Nidan (second degree black belt) in 2015.  He has competed in and placed in both local and national tournaments.  Chris works in Olympic National Park, helping students engage in field science.

As an Amazon Associate, SKA earns from qualifying purchases